- April 11, 2019
In this article, I am going to introduce you to Serverless technology in various flavors along with a usecase and its benefits.

First of all, Serverless does not mean 'No Servers!!' (It is a misnomer). There are various definitions for Serverless, we will try to look at what Serverless means in various contexts.

Let me illustrate through an analogy.

Let us consider a scenario where, there are a number of doctors (dentists, chiropractors etc) who want to serve their patient, but they do not want to invest in real estate for the clinics, equipment and also do not want the burden of managing/repairing their equipment.
To cater to their needs, an investor comes forward and builds a huge building and also procures all the necessary tools and instruments needed by various doctors. When a patient arrives, the doctor will be provided any vacant room and the room will be quickly setup with all the instruments. Once the consultation completes, the room is available for other doctors. The doctors only pay for the hourly consumption of the room and the instruments.

This is the Serverless model, except that, rooms and instruments could be related to servers and the infrastructure required, whereas the incoming patients could be related to the incoming service requests. Application developers can just focus on writing application logic and the code will be run on servers provisioned on the fly by the cloud provider.

How does Serverless work?

Serverless has its roots in 'Function As a Service' paradigm. When we write a function which adheres to a particular definition, the function is deployed and served by the underlying platform when a request arrives.
Serverless Technology works in a similar way, wherein, we have to implement a function which provides a particular behavior and define trigger points which could invoke the function. The trigger point could be a HTTP invocation, or any other event, like a message in a queue.
When the function gets the first request, an infrastructure (which could be a server/container depending on provider), is provisioned and the function is deployed, so that it can serve the request. This period is known as the ‘Cold Start’. After a certain period of time, if there are no more requests for the function, the infrastructure is tore down, thus saving money.
Thus if we have a service which would be serving requests for lets say 5 hours in a day, then we are only paying for 5 hours!. The service would be running roughly for 5 to 6 hours (some cloud providers keep the function warm for a little longer after the requests are served). This provides huge cost benefits.

A logistics company which provides courier services for businesses in a particular geography, wants to build a service which provides status of a particular shipment. Since it’s end users are business clients, this service would usually be invoked only during business hours (say 8 AM to 5 PM). If this company does not use Serverless technology, then they would have to pay for the service infrastructure for all 24 hours a day. However, if they use Serverless, then they would just have to pay per use and since the service is not likely to be invoked after business hours, their cost benefits would be proportional to 62%. And in case, if the service gets invoked after business hours (just in case, some client who stays up late and uses the service), it still works!!

What are the benefits of Serverless Technology? 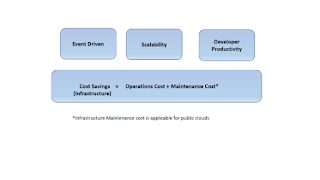 What are the Serverless offerings in Public Cloud landscape?

What does Serverless mean in Private Cloud? 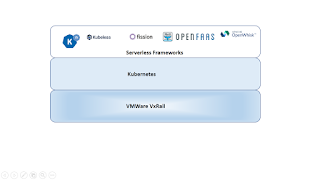 In public cloud, the Serverless infrastructure is managed by the cloud provider (like AWS for example) and it is much like a black box.

However, in private cloud, the serverless infrastructure has to be managed on premise and we can use various frameworks which enable Serverless technology.
On private cloud, we can provision infrastructure using products like VMWare VXRail and then deploy and use Kubernetes as a container orchestration platform.
We can then utilize some of the Serverless frameworks available on Kubernetes, which are shown above.
Similar to the Serverless model explained above, in Kubernetes, the Pods would be created on demand and the respective function/service would be deployed on the Pod.
The above diagram shows some of the prominent Serverless frameworks supported on Kubernetes and also a typical On Premise Serverless Solution.

Popular posts from this blog

Overview: Numpy is a popular library in Python, which is used in Machine Learning and Statistical analysis. This article provides some of the commonly used operations in Numpy. Numpy array operations are efficient and fast compared to normal array operations. Jupyter Notebook: The code is run using Jupyter Notebook and the relevant snapshots are provided. Note: Numpy could be imported as below: import numpy as np Array Operations: Basic Operations: Array could be created using np.array(). Shape property provides a tuple of number of rows and columns. We can apply various mathematics functions like mean, median etc on the array. Comparison in Array: We can apply various techniques to compare one row against other, which would be required when we perform computational analysis. Array Data Retrieval: We can retrieve data from an array, in terms of rows, columns. We can also, retrieve specific rows or columns or exclude specific rows or col
Read more

- October 14, 2016
Recently, I was involved in integrating Pivotal Cloud Foundry with Elastic Cloud Storage (ECS), an object storage solution from EMC. In this post, I'm going to document the hiccups we faced during this integration and how did we resolve this, so that it is easier for other folks who would like to carry out this integration. References: We followed the blog post, https://blog.codedellemc.com/2016/01/05/emc-ecs-with-cloud-foundry/ and the service broker code from git hub, https://github.com/spiegela/ecs-cf-service-broker .  1. application.yml file Configuration: First task would be to update the application.yml file in the broker code to have the correct configuration. Note the spring profiles created in yml file. The active spring profile is defined in the build.gradle file to be 'development'. So based on that, we need to update the correct section in the yml file. Under the broker section: a) Provide a valid ECS namespace name (The namespa
Read more